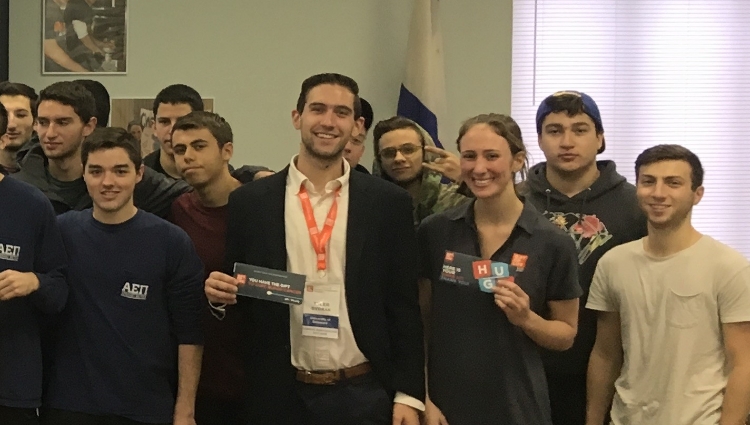 Tyler Dvorak first learned about Gift of Life Marrow Registry at the donor recruitment table in 2016 when he joined the registry. University of Delaware Campus Ambassador Katie Katz was holding a donor drive at his fraternity, Phi Kappa Psi, and although he didn’t have a personal connection to the registry’s mission to cure blood cancer, Tyler swabbed his cheek and joined.

Just four months later, he learned that he was a preliminary match (PM) for a 16-year-old girl diagnosed with lymphoma. A PM call from Gift of Life puts a donor on alert that they may be asked to proceed to Confirmatory Typing (CT), a blood test to confirm that the donor is the best match for the recipient. In Tyler’s case – as often happens – the transplant center did not request CT and he returned to available status in the registry.

But the fact that he was a possible match for someone in need focused his interest on the organization’s mission. When Tyler received an email inviting him to apply to the Gift of Life Campus Ambassador Program (CAP), he was already looking for a way to get involved on campus that would let him give to the community.

“It sounded like a lot, going off to Florida to train with a bunch of strangers,” said Tyler. “I wondered how I would make it work on my campus, and decided to go for it.”

Tyler would be taking up the mantle of the previous CAP, Katie. After attending the three-day Campus Ambassador Symposium in Boca Raton to learn how to organize, promote and hold a donor drive, Tyler felt he was ready. When he arrived at UD, he found that Katie had swabbed nearly everyone on campus, so he was going to have to be creative while he waited for a new class of freshmen to cycle in. He set up swabbing tables anyway, everywhere that students might congregate. "Don’t be apprehensive and don’t worry, it’s absolutely worth being a CAP. Even if you can only swab 30 people they’ll be in the registry for the next 40 years having a long-term impact – you are building a lasting legacy of help."

“I remember one drive in particular at Phi Sigma Sigma sorority,” said Tyler. “There were about 75 people in the room and 69 of them swabbed! I ran out of swab kits!”

Tyler’s advice to new CAPs is to partner up with organizations like the fraternities and sororities, and to take advantage of major events like Dance Marathon, where large numbers of students are in a small space for a long time.

One of the high points of being a Campus Ambassador is the first time you get a notification that someone you swabbed is a match for a patient. “I had swabbed about 200 people at that point so to get that first match was amazing,” said Tyler. “I felt so proud that someone on my campus would play a role in saving a life, and I was able to help my fellow students help others.”

In his time as a CAP, Tyler swabbed 868 new donors, six of whom are already identified as matches for patients, with two transplants completed to date.

As he got closer to graduation, Tyler began looking for someone to take his place. “I put it out to my Phi Kappa Psi brothers that I wanted someone to refer to Gift of Life to be the CAP next year, and I got a ton of applicants,” he said. “I am very proud that my fraternity brothers want to step up and take a role.”

Tyler’s advice for those who want to apply for a CAP internship? “Don’t be apprehensive and don’t worry, it’s absolutely worth being a CAP. Even if you can only swab 30 people they’ll be in the registry for the next 40 years having a long-term impact – you are building a lasting legacy of help.”

“From being a Campus Ambassador I learned a lot about people,” Tyler said. “They genuinely want to help and if you come across with passion and a clear message about how they can do something, if you make them comfortable, then people are incredibly generous.”

Tyler has one more tip for new Campus Ambassadors: “Put yourself out there in as many avenues as possible. They say if you throw enough darts you’ll hit the bullseye, so throw a lot of darts. Even if you think something is an unlikely prospect, go ahead and try – if nothing else you will have educated someone about the cause.”

Tyler graduated from the University of Delaware in May 2019 with a Bachelor of Criminal Justice degree. He plans to become a police officer.