Donor Story
James's son Brandon was diagnosed with leukemia when he was just five years old, so James was more than glad to swab his cheek at a Gift of Life drive. 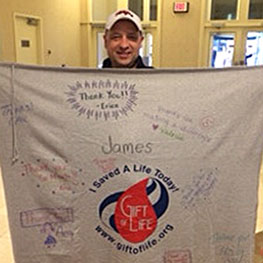 Help give someone the BIGGEST day of their life!
Order your speed swab kit today and get on the registry!
Order your Kit
Tweets by @GiftofLife

When someone is diagnosed with a blood cancer or an immune system disorder, he or she may learn from the doctor that the best chance for a long term cure is through a bone marrow or peripheral blood stem cell transplant. The search then begins to find a donor with a matching tissue type, a search that is determined by human leukocyte antigens, or HLAs.

Why does a transplant work when other treatments do not?

In reality, not every blood cancer cell can be killed by chemotherapy or radiation treatments. The patient’s own immune system must be able to recognize and destroy the residual cancer cells that remain after treatment, otherwise there is a good chance for the cancer to return. Many times, the patient’s immune system is overwhelmed or is not functioning enough to destroy the cancer cells. When a patient receives a bone marrow or stem cell transplant, he or she will receive both the donor’s stem cells that produce all the normal blood cells, and the donor’s immune cells that can recognize and destroy any residual cancer cells. Because of this improved immunity, stem cell transplants are often more effective than just chemotherapy or radiation therapy alone.

Why must the donor and the recipient match?

Every one of us has an immune system that can differentiate “self” from “not-self.” The immune system allows cells that are identified as “self” to survive inside the body. However, it recognizes and then destroys cells that are “not self,” such as viruses, cancer cells, bacteria and others. When we transplant one person’s cells into another, the closer the match the greater the chance that the donated cells will survive and not be destroyed.

In addition, the closer the match, the less likely it is that the new, transplanted cells will see the patients’ cells as “not self” and try to destroy them. This is called “Graft Versus Host Disease” and can cause complications after the transplant. When very severe, it can even result in the death of the recipient. Therefore, the goal of every transplant is to match the donor’s cells to the patient’s cells as closely as possible.

How does the immune system know which cells are “self” and which are “not-self”?

If the HLA types of the donor and patient are matched, then the transplanted cells will likely survive and function normally inside the recipient’s body without harming the recipient.

What are Human Leukocyte Antigens?

The HLA system determines the cell-surface proteins, carbohydrates and sugars that serve as the identification cards of the cells. They come in a large number of combinations. HLA types are sorted into groups, with those most commonly tested including HLA-A, HLA-B, HLA-C, HLA-DRB1, HLA-DQB1 and HLA-DPB1. Each group has a large number of variations within it, which are given numbers. So you may have HLA-A7 and someone else has HLA-A30.

From each of your parents you inherit one HLA set (HLA-A, HLA-B, HLA-C, HLA-DRB1, HLA-DQB1 and HLA-DPB1). This set is inherited together as a group called a “haplotype.” Every person has two HLA haplotypes, one from the mother and one from the biological father. Since we now have the ability to analyze DNA molecules, we have learned that there are at least 4,000 variations of the HLA-B gene alone! That means there are large numbers of possible haplotypes.

Since HLA antigens are inherited, are relatives usually a match?

You are always a half-match – or haploidentical – with each of your parents, since you inherited one of your two HLA haplotypes from each of them. That means that parents and children are always half matches, but never a full match.

The chance of a match with a cousin drops to 16 percent. Nonetheless, it is still worthwhile to test extended family if available, given that at the very least they are just as likely, if not slightly more likely, to match over an unrelated donor.

If the patient does not have a match with a family member (about 75 percent of the time), then a search will be started among the international bone marrow registries, such as Gift of Life, for a non-related matching donor. Since there are thousands of possible haplotypes, the chances of an unrelated person inheriting the same HLA haplotypes as the patient is extremely rare. When we do find a full match, it is like winning the lottery.

How do marrow registries find someone with a matching immune system?

When a patient starts working with a transplant center, one of the first steps is to determine the patient’s HLA tissue type. At that time, other immediate family members are also typed. If there is no family member that matches, a search for an unrelated donor is undertaken by searching the computer files of the Bone Marrow Donors Worldwide (BMDW) registry. This international database contains the HLA types of the approximately 70 global registries combined. The HLA types listed in the registries were determined when individuals signed up and swabbed their cheeks.

Sometimes multiple matches are found in the database, sometimes no match is found. Even though there are nearly 30 million people registered as bone marrow donors, the world population is over 7.4 billion people so the number of available donors is a small fraction, and some patients do not find any matching donors.

For those who do not find a donor, organizing a donor drive may help to find that matching person. Searching among peoples of the same ethnic group and race or whose families came from the same geographic area may help in locating a match.

Why do ethnicity, race and geography matter?

The genes that determine HLA types are found in our DNA on human chromosome 6. These particular genes are naturally highly diverse and are called polymorphic by scientists – literally meaning "having multiple forms."

When a group of people has geographic or cultural separation from other human populations for hundreds or thousands of years, genetic mutations can occur in that population that are passed to their descendants — but not the general human population. That group can develop a unique set of HLAs that may be rare, or even completely unique.

When a patient from an ethnic group with uncommon or rare HLA types needs a transplant, the chances of finding a match among the general population is small. The best chance of finding a match will be if the donor comes from a related genetic pool.

If there is no family member match and there is no match identified in the existing registries, many patients choose to run drives that target their family’s ethnic group and/or the historical geographic area where their ancestral line originated.

People of mixed ethnicity have an especially difficult time finding matches. It is estimated that 75 percent of mixed-race individuals will not find a match in the current registry because their HLA combinations are unique.