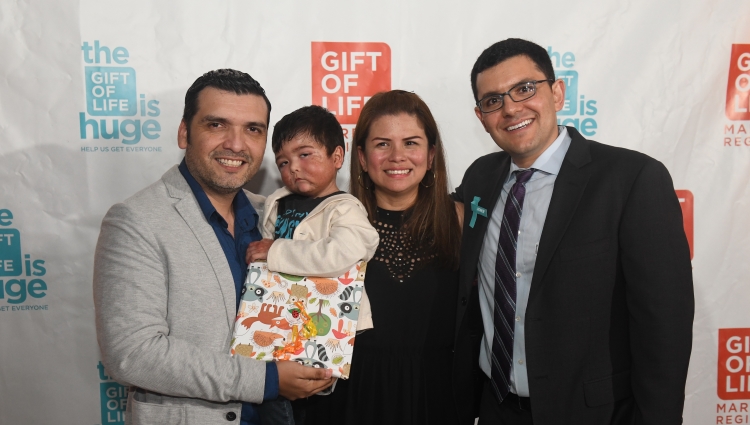 Four-year-old Nicolas and his grateful parents Freddy (l) and Gabriela (c) with Micah (r), the man whose bone marrow donation saved Nicolas's life. They traveled from Bolivia to meet Micah for the first time at Gift of Life's Celebrating Life Miami event.

On November 14, 2019, the parents of Nicolas Baluarte, a four-year-old transplant recipient from Bolivia, were thrilled to meet the bone marrow donor who had saved Nicolas’s life. Freddy and Gabriela’s journey to this moment was difficult and, at times, heartbreaking.

Nicolas was diagnosed with chronic granulomatous disease (CGD), an inherited immune disorder in 2016, when only a few months old. The couple, both 35 years old, had previously lost two boys in their infancy, and were devastated when their third child showed symptoms of the same illness.

They were advised to take Nicolas to Argentina for tests, and it was there he received a diagnosis. Freddy, a dentist, and Gabriela, a medical administrator, were terrified of losing Nicolas, and when they learned a bone marrow transplant was the best treatment available for CGD, they found it difficult to believe that a complete stranger would be a match for him.

But in 2017, they began to find hope: after a year of tests, a matching donor was found for Nicolas through the marrow registry. He received his bone marrow transplant at the hospital in Argentina in July, and began his recovery.

Two years later, in July 2019, Gabriela received an email from an organization in the United States called Gift of Life Marrow Registry, asking if they would like to travel to the U.S. to meet Nicolas’s donor. At first they thought it was an elaborate hoax, but then realizing it wasn’t, became excited to meet the man who had so profoundly changed their lives. As their travel date grew closer, political unrest and a lengthy general strike threatened to prevent them from leaving the country. They decided to travel several days early to ensure they would be able to meet the stranger who now meant so much to them.

Finally, they were safely in Miami Beach and the magical moment arrived: Nicolas’s donor, Micah Kadden, a 34-year-old pediatrician from Washington, D.C., shared a huge hug with Gabriela and Freddy and even got a shy wave and a kiss from Nicolas.

Micah joined Gift of Life in 2010 while attending medical school in Israel, and said he was excited to learn he was a match and that donating was an easy choice to make – it meant saving a life.

“I knew the chance of being a match was very low,” said Micah, “But that’s why it’s so important to have a strong organization like Gift of Life making sure there are more opportunities like this to celebrate life.” Although Nicolas was a bit overwhelmed at meeting so many strangers, he and Micah developed a bond while playing with toy trucks. The family was able to stay in Miami Beach the next day, and were given an insider tour by the Miami Beach Police Department.

Gabriela and Freddy hope that Micah will be able to visit them in Bolivia and meet their entire family. “Thank you from the bottom of my heart,” said Gabriela. “Gift of Life and Micah have returned life to us and given us hope.” Also during the Celebrating Life event, Miami Beach Police Department Deputy Chief Wayne A. Jones accepted Gift of Life’s Community Partner Award on behalf of the department, given in recognition of MBPD’s support for Gift of Life. His wife Mariana Fernandez-Jones accompanied him.