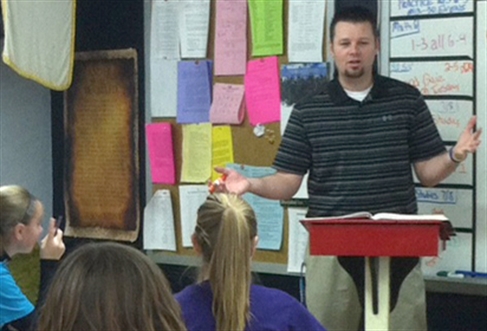 For 35-year-old Shaun, a teacher at Trinity-St. John Lutheran School in Nashville, IL, the decision to volunteer as a donor and register with Gift of Life was an easy one. In 2011, one of Shaun’s eighth grade students and her brother were both diagnosed with Fanconi anemia. The family quickly organized the donor recruitment drive at the school to find donor matches. Shaun said, “We come from a small town and everyone helps each other out. When I heard there was a chance that I could possibly save their lives, I didn't hesitate to get swabbed.

Though he did not match either of his students, Shaun got a call in August that he was a match for a 42-year-old man suffering from non-Hodgkin’s lymphoma. He said that getting the call was “a surreal feeling” and added, “I was excited but a little apprehensive, mostly because I didn’t know what the process entailed.”

Once he became comfortable with the process, Shaun donated peripheral blood stem cells. But he did not stop there. He decided to turn this unique experience into a learning opportunity and Skyped with his students during the donation! He explained, “The student in my class who has Fanconi anemia had a lot of questions, many of which I couldn't answer myself. I decided to Skype (the donation) and show her the process. I also thought it would be good for the students to be a part of it.” Throughout the collection, the staff at the donation center was kind enough to explain how the apheresis procedure works and answered the students’ many questions.

When parents at the school found out about Shaun’s donation and his plans to Skype during the procedure, they were thrilled that he was involving the students in the process. Shaun explained that his intention was to make them feel like they were a part of the effort to save a life, even if it was someone they did not know. Following his donation, Shaun’s students decorated his classroom with streamers, balloons, and a sign that said "Thank you for being a hero."

Shaun grew up in a small town of only 250 people in southern Illinois where he lives with his wife and seven year old daughter. He teaches a number of subjects at the small school, including math, social studies, English, computers, and physical education. He also serves as the school’s athletic director and baseball coach.

Shaun said, “I was proud that the students looked at me as a ‘hero,’ but I really just hoped the process would inspire them.”  He added, “I'm hopeful that now that they know about the process, they will remain involved as they get older or find other ways to help those in need.”