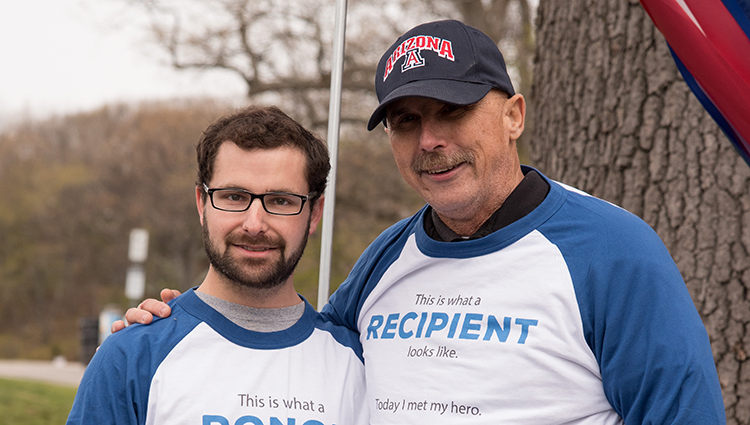 Barry Martineau was visiting China in 2013 when he noticed something was wrong. A doctor’s visit on his return to the U.S. confirmed his concerns: he was diagnosed with myelodysplastic syndrome, a bone marrow disorder in which new blood cells fail to mature or function normally.  Although it took him time to grasp the gravity of his situation, he says he never felt fear or self-pity, and was confident that the transplant process would work for him.

His brothers were disappointed to learn that they were not matches for him, but this situation is not unusual. Only 30 percent of matching donors are found within the family, so most patients in need of transplant must rely on the worldwide registry to find a donor. Barry was certain that his donor was out there.

Just two months before his diagnosis, Barry and his wife Diane had purchased a house in Arizona only 15 miles from Mayo Clinic Hospital. It turned out that this was where his treatment, transplant and recovery would take place. The search by his transplant doctors found him a perfect 10 out of 10 donor match in Gift of Life’s registry. “I committed the entire process to prayer and was amazed and grateful that the search took very little time,” said Barry.

“First, these new blood cells need experiences, they need to be outdoors and doing new things. Second, they need to meet new people and be surrounded by great friends and loved ones.” — Donor Derek Cohen

Matches are determined by immune system factors called Human Leukocyte Antigens (HLAs), and because genetics are involved, they are generally found between people who share a similar ethnicity.

Barry’s perfect match was 28-year-old Derek Cohen, who had joined the registry in 2011 during his Birthright trip to Israel. Derek was thrilled to be called to donate peripheral blood stem cells in Washington, D.C. in December 2014. The cells were flown to Arizona where Barry had undergone the conditioning regimen at Mayo in preparation for his infusion, with his wife Diane and his brothers at his side.

Derek sent a letter to Barry, with instructions for how to care for his new cells. “First, these new blood cells need experiences, they need to be outdoors and doing new things. Second, they need to meet new people and be surrounded by great friends and loved ones.”

The transplant was a success, and Barry began to regain his strength and energy. “Once again I am pursuing an adventurous and fulfilling life,” he said. “I am about as active as I was ten years ago and count on getting stronger.”

In early 2016, Barry and Derek were invited by Gift of Life to attend the Steps for Life 5K in Boston, and be introduced to each other in person for the first time. Their emotional introduction was a heartwarming moment, and was incredibly meaningful to Barry, who had just celebrated his 32nd wedding anniversary.

“I am so grateful to Derek, he’s reminds me a lot of myself when I was his age,” said Barry. “His genes are working just fine in my body. My goals are not to waste this great opportunity I have been given.”

Barry is retired from his career as a social worker, and says he is enjoying life. He has also taken Derek’s advice for his new cells to heart, spending plenty of time outdoors in the mountains camping, and meeting new people through his ongoing service to others.