Gift of Life has partnered with youth camps across the United States since 2011. Young adults are the bone marrow and blood stem cell donors most requested by transplant centers for their cancer patients. By recruiting donors among the youth camp staff members, many of whom were campers themselves only a summer or two ago, over 115 matches have been found for patients in need.

Jeremy was working at an NJY Camp in Pennsylvania when Gift of Life visited in June 2012 to recruit volunteer donors. It was clearly for a good cause and only took a second to swab the inside of his cheek, so he joined the registry – and promptly forgot all about it.

In spring 2016, however, Jeremy received a call letting him know that he could be a match for a six-year-old child with myelodysplastic syndrome (MDS), a type of blood cancer.

Jeremy was attending The Ohio State University at the time, preparing for graduation, so he had to arrange for time out of classes for his preliminary medical examinations. Once he was confirmed as a perfect match, Jeremy talked to his parents about donating bone marrow and found both them and his friends to be incredibly supportive and proud of him. He even learned from a friend’s mother that she, too, had received a transplant and was grateful for donors like Jeremy.

The donation was scheduled for May 4, only four days after his college graduation ceremony. “Everyone took care of me,” said Jeremy. “I just sat in bed watching TV and drinking a lot of water.” Since he was one of the 20 percent of donors who give bone marrow (most donate peripheral blood stem cells) his procedure was done under general anesthesia. “I always knew I would go through with the donation because it’s the right thing to do,” he said. “I assume it was hard [for the patient] because no one in their family was a match. Deep down I knew, I knew that I wanted to do it.”

Although he does not know his recipient’s identity, Jeremy hopes they will meet in the future. “My mother has a gut feeling that the transplant worked,” he said. “I’ve heard from other donors that they feel their recipients are part of their families – it’s crazy, my recipient may even have picked up my allergies.”

Jeremy recommends that if the opportunity ever comes to donate marrow, take it. “If you are ever doubting whether to do it, just know that it is someone’s life.”

Jeremy lives in Hollywood, Calif. where he is pursuing his career as a comedic screenwriter and producer. He enjoys playing soccer, dancing with friends, writing and watching movies.

SHARE
TWEET
All Posts
Stories
News
Donor Story
In spite of being in a car accident two weeks beforehand, Zachary made his peripheral blood stem cell donation on schedule. 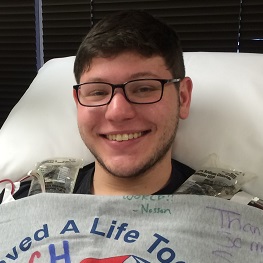