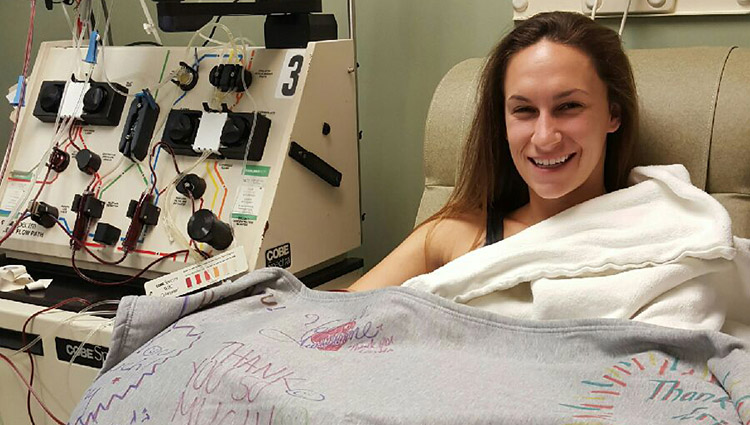 Leigh was studying political science at the University of Florida in Gainesville, Florida when she stopped at a Gift of Life donor recruitment table on Halloween, 2011, and decided to join the registry. As someone who regularly donates plasma and platelets, she felt it was natural to also become a potential donor for bone marrow or blood stem cells.

Four years later, as Leigh and her family attended a cousin’s wedding in Ireland, her father’s business partner sent a text message that someone had been calling for Leigh and said it was urgent. When she arrived back in the United States, she turned on her phone and immediately realized that someone at Gift of Life was trying to reach her. Standing in the airport on her cell phone, she learned that she was a possible match for a man with a bone marrow disorder.

A blood test was needed to confirm the match between Leigh and the recipient, but she was moving to Texas with her (then) fiancé Andy as he began training at the Navy flight school and they prepared for their wedding. After arriving in Texas, Leigh visited a lab and the match was confirmed. “I was in absolute disbelief that I was the match!” she said.

While she was completely committed to donating, Leigh was also in the midst of wedding preparations. The Gift of Life team worked with her to create the best schedule possible. With the donation date set for nine days after her wedding, Leigh headed to the airport to fly to Washington, D.C.

But nature had been busy that week: a blizzard had just buried the eastern half of the nation under record snowfall, bringing transportation to a halt and stranding people in airports and train stations. At the crowded airport, Gift of Life Donor Services Coordinator Hildy Bell spoke with the gate agents to explain the urgency of the situation. Another passenger gave up a seat on the plane so Leigh could get on board, and the donation was on.

Leigh was already familiar with the apheresis process and knew what to expect at the donation center, Apheresis Associates of Northern Virginia. Her blood was drawn from one arm, the peripheral blood stem cells were identified and collected by the machine, and the remaining blood was returned to her other arm. Leigh felt that her recovery was immediate, saying “They told me it would take a day or two to recover, but I felt like there wasn’t much recovery at all. I was able to travel and carry my own luggage, none of it was uncomfortable.”

Although Leigh initially told only her family and close friends about donating, when Gift of Life posted her photo on Facebook she began getting messages of congratulation from people she hadn’t seen since high school. “I’m excited to spread the word and hopefully show people that it’s so simple to donate and save someone’s life,” said Leigh. “There are so many organizations out there and although you give, sometimes you’re not able to see what impact you’re making. With Gift of Life, I was able to donate stem cells and actually see that I’ve saved someone’s life. That’s just incredible to me!”

In July, Leigh heard an update on her recipient – he is now cancer-free. “Best news ever!” she said. “I was crying at work when I found out. It’s really exciting.” She is looking forward to the one-year anniversary of the transplant when they can start communicating directly, and hopes to meet her recipient in person someday.

Leigh works for the U.S. Navy in the Department of Morale, Welfare and Recreation, at the same base where her husband is in training. He has less than a year left before graduating flight school as a Naval Aviator and getting his wings.