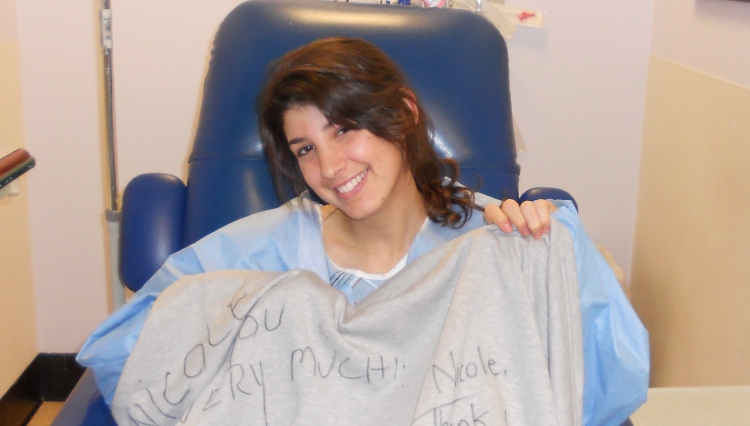 Nicole saved a stranger, and went on to help other donors

It all started with a simple cheek swab during my year abroad in Israel—no blood, no pain, no mess. Just a few quick cheek cells! I remember the day perfectly. We were thirty girls standing in the main room of our school, individually weighing the pros and cons of becoming part of the Gift of Life marrow registry. I told a girl next to me “I hope to be a match." Looking back, I said this knowing my chances were very slim. I filled out a signup sheet in block letters and filled in circles, parted with a few cheek cells, then just like everyone else I had trouble finding the swab’s placement in the foam packing, sealed my envelope, and ran off to class.
Fast forward less than a year later to my winter break of 2010. I was in Israel for vacation working with children flown in from Africa for medical care. My days were exciting but exhausting, and one night, I was tossing and turning in bed from being over-tired and jet-lagged. I heard my phone buzz and immediately opened the urgent email from Gift of Life. And I thought I was unable to sleep before receiving this email! “You have been identified as a potential match for a patient needing a bone marrow transplant.” I read the email over and over and thought that I was dreaming. With the time difference to my advantage, heart racing, and stubbing my toe on my way downstairs as proof that I wasn't actually asleep and dreaming, I ran to call for more information.
The morning that I landed in New York, I had blood taken at a lab and my “potential match” was upgraded to a “complete match” a month and a half later. My thoughts turned from fear of the needle to fear of my power. I held the power to simply say the two-letter word “NO” and not go through with the donation. I held the power to possibly deny this stranger life. I also held the power to bring hope to this stranger, his family, friends, and community all rooting for his recovery. I stayed far away from the powerful two-letter word and after a complete physical and medical examination, the date for my bone marrow collection was set.
The morning of April 7, 2011, came faster than I expected. While waiting at the collection center, I had the opportunity to meet this man through writing a letter—the most special part of my donation experience so far. This is where his identity changed from a stranger to My New Friend. Although I had to hold back personal details due to confidentiality reasons, my thoughts and emotions poured into my letter. I wrote continuously until the nurse came to take me in. The doctor, medical team, and nurses took great care of me, and I cannot be prouder of the fading scar on my lower back.
I always wonder what My New Friend looks like, what his interests are, how he is feeling today, and whether he wonders about me, too. The day that I was out of bed and back to my usual routine, I marked off the day six months away in my calendar and began my countdown to receive the half year update on his condition. I called the Gift of Life office in Florida on that exact day and, out of apprehensiveness, way before the offices opened. I cried with happiness and relief when I was told that My New Friend was discharged from the hospital, and I cannot wait for the year marker on April 7, 2012, when we can hopefully meet...121 days and counting...
From stranger to friend, this man is the true hero. I recently wrote My New Friend another letter to wish him well, tell him that he is still in my prayers and thoughts, and let him know the impact that he has made. Because of My New Friend, I was found as a match from the Gift of Life registry and knew I had to do more. As a tribute to My New Friend, I organized a number of drives with two others this summer to help expand the registry, and a five-mile run to raise funds for more swab kits to be processed.
Because of my positive experience as My New Friend’s donor, I helped along a fellow donor in the decicion process. Because of this Everlasting Friend, a fellow donor saved a life, a match was found at one of our drives this summer, and hopefully more matches will be found from funds raised by the runners. My Everlasting Friend, who may be a baker, NBA player, next president of the United States, or stranger on the street, is a hero who accomplished more than most people do in a lifetime.
Update: At the Gift of Life Gala in 2013, Nicole finally met her recipient and Everlasting Friend, Terry! SHARE
TWEET
All Posts
Stories
News
Survivor Story
When Jay Feinberg was diagnosed with leukemia and told he would need a bone marrow transplant to survive, he had no idea that his personal journey would result in the establishment of a grassroots organization that would later save the lives of hundreds of patients in need. But that's precisely what happened. 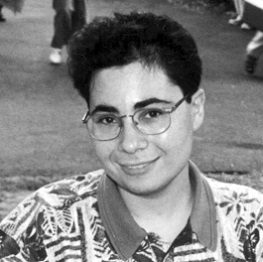 Jay Feinberg received a transplant to cure his leukemia, and went on to found Gift of Life.
Read all stories
COVID-19 Status: Gift of Life is an essential organization and continues stem cell transplant activities
Share
Tweet
Copyright © Gift of Life Marrow Registry 2021 Terms of Use | Privacy Policy +1.800.962.7769