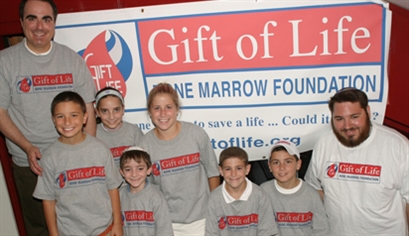 Sunday, August 29 was a bright, sunny day in Queens, New York. It was a perfect day for a ball game, but more importantly, a perfect day for Gift of Life to celebrate its success by introducing two young boys to their heroes, their bone marrow donors. The setting was a luxury suite, high above the field at Shea Stadium, as the New York Mets prepared to face the Los Angeles Dodgers.

Gift of Life was happy to reunite Brian (age 9) and Mark (age 11) one year after they both underwent bone marrow transplants at the Dana Farber Cancer Institute at Children's Hospital in Boston. The day began as Gift of Life's Medical Director, Dr. Michael Schuster invited Hall of Fame pitcher Tom Seaver to begin the program.

Mr. Seaver was taken aback when young Brian informed him that his favorite baseball player is Derek Jeter! But, he recovered from the surprise and went on to make the emotional introduction of Brian's bone marrow donor, Adam, an eye surgeon who lives in New York with his wife and two young children. Adam joined Gift of Life's registry in February 2002 at a recruitment drive held in Rockaway, New York during the search for a match for a patient named Barry Mishkin.

According to Adam, when he learned that he was a match for a young boy, "My first thought was that this could have just as easily been one of my kids." He continued, "Every day of my life I get to give people back their vision, which is a tremendous good deed. But if it wasn't me who showed up to work that day, it would be some other doctor who is as capable as I am. But this is the one mitzvah (good deed) that only I was able to do. I'm very lucky to have been given the chance to help save this terrific young man's life."

Brian and Adam were excited to learn that they shared yet another special bond; their birthdays are just two days apart in September! Brian's mother, Karen said, "Adam is wonderful. It takes a special person to do what he did."

Next up was 11 year-old Mark. His father admitted that it seemed like a miracle that a stranger was willing to help his son. Mark's donor, Samuel, joined Gift of Life's registry during a recruitment drive at Rutgers University Hillel during the fall semester of 2001. He is currently working towards a major in Communications with a minor in Jewish studies, and hopes to pursue a career in Library Science and Education.

Upon meeting Mark for the first time, Samuel said, "I don't really know how to describe the elation I am feeling." He continued, "I think Mark is really great. He is going to grow up to be fun, athletic and energetic." Mark's mother, Sherri, says that, "What Samuel did for our family was just a miracle. He saved our son. We are very very thankful. He is part of our life and our family now."

Of course, no trip to Shea Stadium would be complete without a visit and autograph from Mr. Met, the official mascot of the New York Mets! Brian, Mark along with their siblings and other guests were delighted to shake his hand when he visited the suite!

August 29 was Jewish Heritage Day at Shea Stadium, a special recognition of Jewish Mets fans held in conjunction with International Week, a celebration of New York's cultural diversity hosted by the Mets. Among the many guests on hand to celebrate the special introduction was Gift of Life's Founder and Executive Director, Jay Feinberg, who said, "Witnessing these meetings between transplant donors and recipients is always an emotional and uplifting experience. It is enormously gratifying to see the positive outcome of our work." He continued, "We are very grateful to the New York Mets for providing us with such an exciting venue for this happy occasion." Jeff Wilpon, Senior Executive Vice President and Chief Operating Officer of the New York Mets said, "It's heartwarming that such a reunion can take place at Shea Stadium. We are thrilled that the young boys will get to meet the people who saved their lives."

Though both transplant recipients were young children, their expressions of gratitude to their donors were poignant and sweet. Brian called his donor, Adam, "a savior to children. It was a very nice thing he did for me". Mark says that his donor Samuel, "will always be known as a person who gave bone marrow and a second chance to a kid. He saved my life."