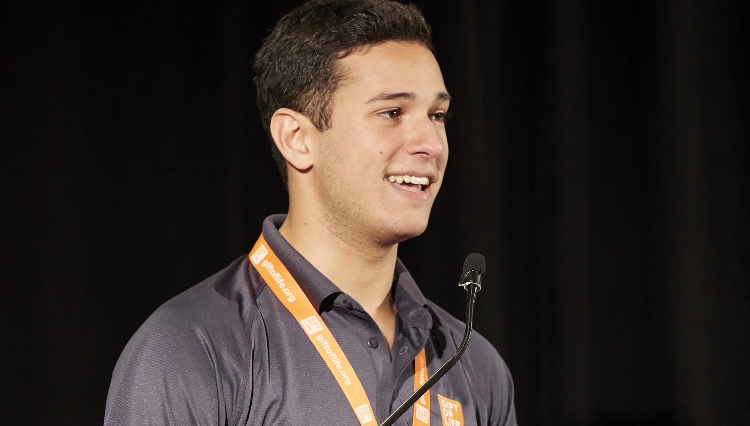 Earlier this year Judah was flying to Las Vegas and out of boredom began cleaning out his wallet. He pulled out the donor card he received from Gift of Life when he swabbed his cheek and registered as a donor. “Well, it’s been three years now, I’m probably not going to be called, and even if I am, most people don’t go all the way through to transplant,” thought Judah. He stuck the card into his bag. The plane landed and Judah’s voice mail indicator lit up: he had just received an urgent call from Gift of Life that he was a match for a man with a bone marrow disorder and he was needed as a donor.

After a blood test to confirm the accuracy of the match and a physical exam to check his health, Judah was scheduled to donate peripheral blood stem cells in March.

“Nick [Hudson, Gift of Life Recruitment Manager] came with me to my donation, and I asked how I could be more involved,” said Judah. “He told me about the Campus Ambassador Program (CAP), I applied, and now I’m in. This is a great way to give back.”

Judah, along with more than 80 other Campus Ambassadors, attended a three-day training session at the Campus Ambassador Symposium in August. At the closing banquet, marrow donor Harrison Cohn was introduced to his recipient, 68-year-old Sandy Singer, an airline mechanic who was thrilled he would soon be able to return to the work he loves. “When I saw the recipient on stage talking about his life being saved, I realized that here is a real person who was saved,” said Judah. “I wonder if I gave someone like Sandy more time with his kids and grandkids.” Since he can speak personally about the experience of being a donor, Judah feels this will help his efforts as a Campus Ambassador. As a major in marketing, finance and philosophy, he has an entrepreneurial streak and feels that his representation of Gift of Life will help his career. “Everything I’m learning will help my aspirations, how to meet people and get them to listen to me, how to change their viewpoint. I’m learning fundraising, how to tell a story – storytelling is so important to entrepreneurs,” said Judah.

He is also excited to help bring new donors into the registry and potentially save more lives. “The most exciting thing is helping someone in a tangible way,” he said. “You will get that email that a donor you swabbed saved somebody, and you can sometimes meet these people who were saved. It isn’t just about giving money that you don’t know how it was used – this is an opportunity for us, as young people, to be lifesavers. Anyone can be a donor. I didn’t think I’d get called, but I ended up becoming a donor and I feel like I won the lottery. If people could only see the reward they’d all do it.”

Judah is thinking of his recipient, wishes him the best, and hopes they will be able to meet some day. In the meantime, he is busy on campus with both his classes and planning donor recruitment drives for Gift of Life. In his free time he enjoys skeet-shooting, poetry and creative writing, and scuba diving.

Learn more about the Campus Ambassador Program here. Applications for the Spring 2018 semester will open on December 1, 2017.