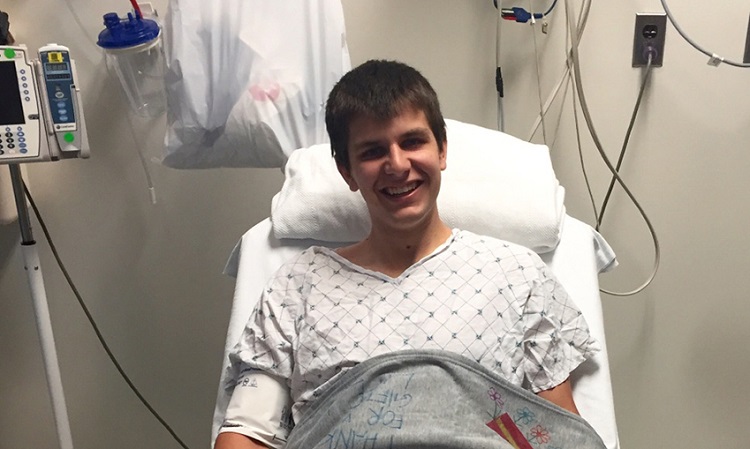 On the November day when Michael Cizek swabbed his cheek and joined the Gift of Life Marrow Registry, he never dreamed that only six months later he’d be called as a match. His marrow was needed to save a 52-year old man suffering from Acute Myelogenous Leukemia. Michael had registered at a donor drive put on by the Gift of Life’s Campus Ambassador Program (CAP), making him the first bone marrow donor resulting from a CAP drive.

“He is my dad’s age, and I can’t imagine living life without my dad,” said Michael. “If he was in the same shoes I hope someone would donate for him. After learning about the procedure and praying, I felt at peace that this is something I should do. Once I made that decision, I was 100% in. I am rich in health and this man, about my dad’s age, is poor in health, so why can’t I give my richness to him?”

Michael did exactly that, flying with his mother to the collection center at Georgetown University Medical Center in Washington, D.C., to donate bone marrow. “I was concerned about the donation process being painful, but my experience was completely the opposite. I had a few days of soreness, but was back on my feet and back to normal right away,” said Michael. “I was happy when it was done; I donated the full amount needed. I was walking around, eating and drinking and the doctor said, ‘Why are you still here? Go home!’”

Michael had the support of his family, and has had incredible positive reactions from his friends and fellow students, finding that they are curious about the bone marrow donation process and about how his recipient is doing. Michael won’t receive an update for several months, but he’d like to meet his recipient someday. Donors and recipients may only communicate via letter for the first year due to federal restriction on contact. After the year passes, if both agree, they can meet in person.

Michael joined the registry during a recruitment drive organized by Kasey Shallenburg and Cassandra Imrie, the Campus Ambassadors for the University of Florida. Kasey, who joined the registry in 2013 prior to becoming an ambassador, was called as a potential match for a 37-yearold man with Acute Lymphoblastic Leukemia eight months later.

“Unfortunately, the match did not work out, but having the chance to save a life seemed like an amazing opportunity,” said Kasey. “I don’t know Michael personally, but I hope to meet him and definitely want to say thank you to him, along with all the volunteers who helped run the drives at UF. It’s amazing to see our hard work pay off in such a tangible way.”

College students across the country have a great opportunity to contribute – and build useful career skills – by participating in the program. CAP interns receive training in how to organize and manage events, while reaching out to the most requested group of donors in marrow registries. The history of marrow and blood stem cell donations shows that those between 18 and 25 years old are called upon more often, so reaching out to the population of young adults through the CAP program is of huge importance in building the numbers of lifesaving bone marrow and stem cell donors.

Congratulations, Michael, for being the first donor from a CAP recruitment drive, and we look forward to seeing your accomplishments in the future!

Michael, a finance major, attends the Heavener School of Business at the University of Florida in Gainesville, Fla. He enjoys exploring and geocaching, and has a unique twist on the YouTube vlog: he rides a tandem bike around campus and talks with people riding on the back. Keep an eye on the Gift of Life YouTube channel this fall, as we’ve asked Michael to make a special video for us!