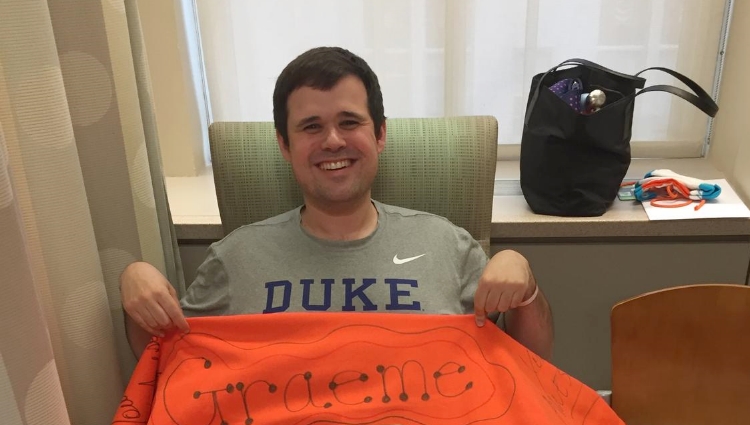 New dad gives bone marrow to save a toddler

When Graeme heard the news on April 9, he was amazed: he was a bone marrow match for a toddler suffering from acute myeloid leukemia, and had the opportunity to save the child’s life. Since he is a manager in telemedicine for a nationally recognized cancer center, Graeme knew the importance of what he was being asked. He had a six-month-old baby at home, and could easily imagine the anxiety the child’s parents were feeling.

“I joined the registry while I was in high school at Beth David Synagogue,” said Graeme. “I felt if there were people in need, maybe I could help. I was so excited when I got the call!” He was also a brother in the Zeta Beta Tau fraternity during college, a partner organization of Gift of Life that holds donor drives at chapters across the country.

Because Graeme works at a cancer center, he was able to donate bone marrow right there. His wife went with him, and his colleagues were incredibly supportive. “Bone marrow donation is incredibly easy,” said Graeme. “I got there at 10 a.m. and the procedure itself took about an hour, I was home by 5 p.m. and only felt a little achy. Everything at my donation went great. Gift of Life Community Engagement Coordinator Russell Lowe – also a ZBT brother – came and sat with me and was super helpful, making sure my wife had food and that we were taken care of.”

"Bone marrow donation is not scary, it really isn’t. I traded a day off work to save a 3-year-old kid’s life."

Although he worked from home the day after his donation, Graeme felt it wasn’t really necessary and he could have gone in. He explained that telemedicine makes it possible for patients who are too distant or unable to travel to the hospital to consult with a doctor by videoconferencing from home. If special instruments are needed for the doctor to view a skin lesion for example, the patient can visit a local clinic or pharmacy equipped with a telemedicine facility.

Graeme wants to dispel the myths about donating bone marrow. “Bone marrow donation is not scary, it really isn’t,” he said. “Everyone says it is painful and risky, and it is not. I traded a day off work to save a 3-year-old kid’s life. I was under anesthesia less than an hour.”

Graeme plans to write his recipient and his parents as soon as he gets the first update. Someday he would love to meet them and introduce the kids to each other. Graeme will have to be patient for now, as regulations require that transplants remain anonymous for the first year. As soon as an update is received from the transplant center by Gift of Life, the status is passed along to the donor.

Graeme has just begun studies towards completing his Executive Master of Business Administration degree, and jokes that in his free time he “chases after a 10-month old baby – there IS no free time!”