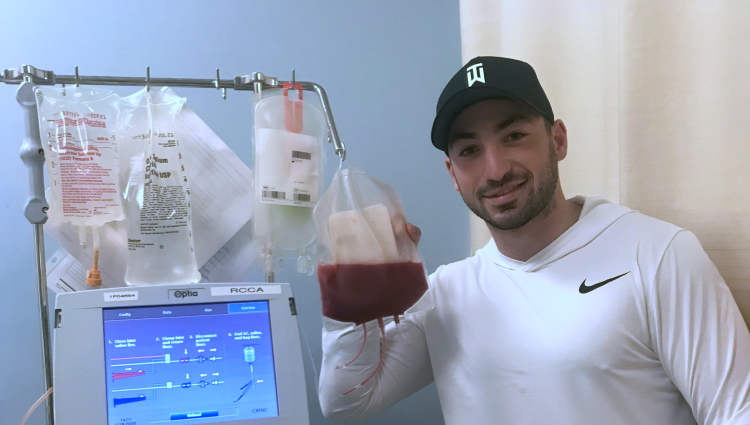 On April 9, 2020, Robbie was under stay-at-home orders during the coronavirus pandemic when he got an unexpected phone call from Boca Raton, Fla. It was Gift of Life calling with the exciting news that he was a match for a man in his 70s fighting to survive acute myelogenous leukemia.

Robbie joined the registry six years earlier at his parents’ urging. Although Gift of Life’s records show that the December, 2014 drive was organized to find a donor for Dr. Oren Warter, Robbie said, “I wasn’t aware it was a drive for a particular person. I had just turned 18 a few months earlier and my parents said swabbing and joining the registry was a great thing to do.”

Learning he was a match came out of the blue, but he knew right away he would donate. “I am on Gift of Life’s mailing list so I was aware of the mission, but I never thought I would really be called,” said Robbie. “My parents and sister were incredibly excited, and the whole family was in agreement that I would donate.”

Although he was working at home and had many questions about donating at a hospital while a pandemic was going on, Robbie trusted that there were systems in place to protect donors, and that the Hackensack Medical Center knew what it was doing. He was right – when he arrived he was suited up in PPE and wore this protection the entire time he was donating.

“Just because there’s a pandemic doesn’t mean that other health needs have stopped; they haven’t,” said Robbie. “People fighting cancer still need help. No matter how you look at it – morally, logically, ethically – it’s the best thing you can do.”

Stem cell collection is done using an apheresis machine, and can take four to six hours to separate the needed stem cells from the blood, the rest of which is returned to the donor. “I watched one movie, then read some articles on my phone and took a nap. Before I knew it, I was done,” said Robbie.

“Although many of my friends are already in the registry, a few had not heard of Gift of Life,” he added. “I hope more of them will join the registry after hearing about my great experience. I want to stress first, how easy it is to donate, and secondly, that for such a minor activity and a few hours of your time, you can save someone’s life! It’s important to do.”

Robbie knows that the recovery period from a stem cell transplant can take time, but he hopes to hear good news about his recipient. Although they must remain anonymous for the first year due to federal regulations, they may have the opportunity to meet in person someday. “I’m proud to say this is something I’ve done and helped someone who needed it,” he said.

Robbie, now 23 years old, is a native of Livingston, N.J. living in New York City where he works for a major financial and advisory services firm. In his free time he plays golf, is a sports fan, and runs. He has completed the half-marathon and plans to run in the next New York Marathon in 2021.

Although Dr. Warter received a transplant in early 2015, he passed away later that year from an unrelated condition. The Warter Strong Donor Circle at Gift of Life has raised more than $55,000 and added 1,067 donors to the registry resulting in four lifesaving transplants, including Robbie’s recent stem cell donation. In the donor circle, Barbara Warter says “Looking forward to more matches, and more happy times for many more people, for many years to come.”