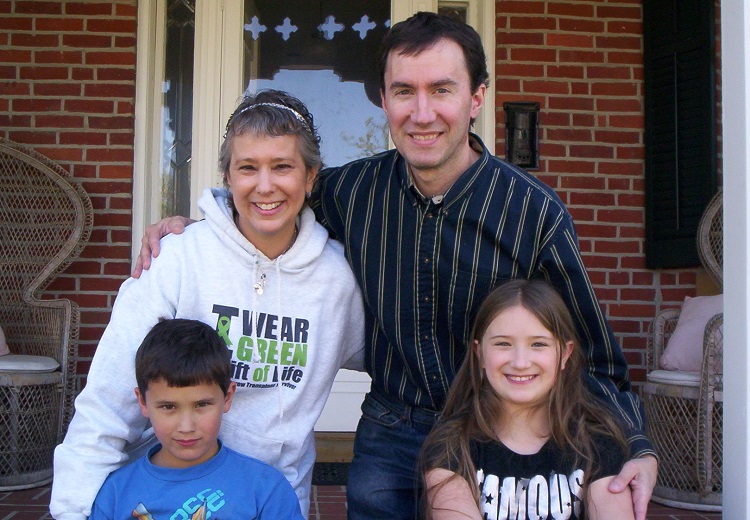 In the early months of 2010, I began experiencing debilitating fatigue. At my annual OB/GYN appointment, I had my labs drawn, and my doctor’s office called to tell me I was anemic and instructed me to start taking iron supplements. I wasn’t surprised by this news. I didn’t eat red meat and I worked out two hours a day five days a week.

I asked that the labs be faxed to my family doctor so she had them on file. Within the hour, my family doctor’s office called to tell me I was not just anemic but pancytopenic; all three types of blood cells were low.

A long quest for answers ensued. I had literally hundreds of labs drawn. I saw multiple doctors. The first hematologist I was referred to did not believe I had a bone marrow problem but rather an autoimmune disorder; he was not concerned about my counts, despite the fact that I repeatedly pointed out to him that they were trending down. He remained calm despite my increasing alarm. Over the course of several months, I saw him. I saw my family doctor. I saw two different rheumatologists. I saw an immunologist. I saw a neurologist. I just knew something was very wrong. It was hard for others to believe this, seeing me, looking healthy, teaching at Ohio University, teaching fitness classes at the local Y, parenting, fulfilling myriad professional and personal obligations.

In October 2010, I had a serendipitous encounter with an old friend I hadn’t seen in 15 years. We met in Providence, RI. He insisted on putting me in touch with his sister, Andi, a nurse practitioner with decades of experience in bone marrow transplantation. I was reluctant to call her; my hematologist kept telling me I didn’t have a bone marrow problem. But my friend David pestered me in the weeks after we saw each other and, desperate for answers, I called. After hearing my story, Andi was adamant that I demand a bone marrow biopsy at my next hematologist appointment. I did; I had my first bone marrow biopsy on November 22, 2010.

Andi was right. On November 29, 2010, my hematologist called to tell me I had myelodysplastic syndrome (MDS), a type of bone marrow failure and precursor to acute myeloid leukemia (AML). He told me I would likely need a transplant and referred me to an MDS specialist at the Arthur James Cancer Hospital at Ohio State University.

In the two intervening weeks between my diagnosis and meeting the great man who has since meticulously overseen my care, I pored over my biopsy results and over my cytogenetic report, trying to make sense of these highly complex lab results. I talked at length with Andi. The news was bad, the trajectory of my disease was terrifying and my prognosis was very poor. We discussed the swift and aggressive treatment that would be necessary in the road ahead.

When I met Dr. Blum, the doctor who would oversee my care, I knew I had found another essential ingredient for survival: a brilliant doctor. He ordered my first round of treatment the very day we met, December 13, 2010. Not many doctors would have indulged the urgency I felt at that time. He heard me. He understood. It struck me then—and has ever since—that he was as invested in my survival as I was.

Even before I found a donor match, I knew I had finally found my doctor match, equally vital to my survival.

The process of searching for a stem cell donor began to unfold that day as well.

I have three sisters. We are very close emotionally. So, it was a shock as one by one they dropped out as compatible donors. I cried a river each time one of them was eliminated as a possibility. But none of them were a match for me. This was terrifying. I despaired. It was one of the hardest and darkest moments of my journey.

We had to move to a worldwide search for a donor. The transplant coordinator at the James Cancer Hospital, Michelle Johnson, found three possibilities. On February 24, 2011, I learned that one of them—just one—was a perfect 10/10 match.

That means, of the 16.5 million registrants in the database at that time, only one was a perfect match. The relief, joy, and sheer jubilation I felt at this news is indescribable. A match: a chance for a cure.

At the time of extraction, my donor was 25 years old, with O+ blood—the only three things I was allowed to know about him—gender, age, and blood type. This is not much information to have about the person who would ultimately save my life and whose stem cells would produce a new blood cell system that would govern my well being.

In April 2011, I was admitted to the James Cancer Hospital for a month to undergo the transplantation process. I was transplanted on May 3, 2011.

Myeloablative transplant is very intense. Ablative chemotherapy obliterates your blood cell system. Cancer chemo takes out cancer cells. Ablative chemotherapy takes out all of your blood cells. It is grueling. I dropped 25 lbs in a little over two weeks. My counts hovered at the lowest they could possibly be while still alive. The donor stem cells were transfused, and those cells made their way into my marrow and started producing an entirely new blood cell system. My struggle was intensified by the fact that while in the hospital I fainted and broke my ankle. I could not walk for 3 months. I developed life-threatening pulmonary embolisms in both my lungs. It was a trial.

Throughout this process, I was at profound risk of infection; I had no immune system to counter any wayward virus or bacteria that might make its way into my body or was already being harbored by my body.

Once engraftment was underway, and the donor cells began producing cells, I was released from the hospital, though still at grave risk of infection. Although my counts have now been in the normal range for over a year, my immune system is still redeveloping and will be for a long time to come. I recently started the vaccination process, a process that at best will take a couple of years, just as it does with newborns—because of course all of my old immunities and antibodies were destroyed with the transplant. It no longer matters that I had chicken pox as a child not once but twice! That immunity is gone forever.

I now carry my donor’s HLA type. The blood that runs through my veins originates from his cells. Any blood test would tell you that my immune system is a clone of his. It is a miracle.

And this year has taught me that the only way to live your life is to believe in miracles. Every second of every day that my body does everything right is a miracle. We are surrounded by miracles just waiting to be understood as such.

I want to share few other key lessons I learned from this journey.

Trust yourself. If you know something is vital to your survival, be determined. Be strong. And, if you must, be stubborn.

Life is full of challenges. They don’t need to come from within. Quiet the internal critical voices; focus instead on your strength and beauty. Think about everything your body does right every second of every day. Be your own best friend, not your own worst enemy.

Focus on what serves your higher interest. When there is choice, opt to streamline negativity out of your life.

Never underestimate the power of Providence. Pay attention to the signposts. Believe in miracles.

The way you live your life counts. Be mindful of your choices and be sure that by making those choices, you are honoring yourself.

Live mindfully knowing you have done everything that you could do to live a meaningful life full of joy.

I have learned a lot this year—about love, gratitude, and joy. Down to the very depth of these emotions one can experience.

There is, after all, a person in this world who, without knowing me, underwent the process of testing, getting shots to increase his stem cell production, and going through the cell extraction process—all the things he needed to do to save my life.

On May 3, 2012, my first re-birthday, I submitted the form to waive my anonymity in the hopes I would learn my donor’s identity. On July 27, 2012, I received an email from him. His name is Yaakov. He lives in New Jersey with his beautiful wife Miriam and two incredibly adorable children. He is my donor. We carry the same HLA type. My blood cell system derives from his. I said to him in my reply message, I am glad to know you Yaakov, I am glad my hero has a name and a face.

Through Gift of Life, Yaakov gave me a second chance. I think of him every day and send him love and gratitude. It is not enough, but it is all I can do. Only 50% of people in the donor registry when matched actually go through with the donation process. I am so grateful that he did.

My illness and the rocky road of treatment and transplant gave me unambiguous information about the substance and quality of the people around me. My heroes are many: my donor, my doctor, my husband, my children, my family, and my friends. Their collective efforts to keep me on the path to recovery have truly been heroic.

On December 30, 2012, I met my donor for the first time. Words are inadequate to describe the powerful connection I felt to him and his family the minute the door opened and he and his wife greeted us. This connection is immutable. Since leaving, I feel a void that is hard to describe. I had no sense of just how overwhelming our bond would be. The tie, the connection, it is so strong; I cannot wait to be together again.