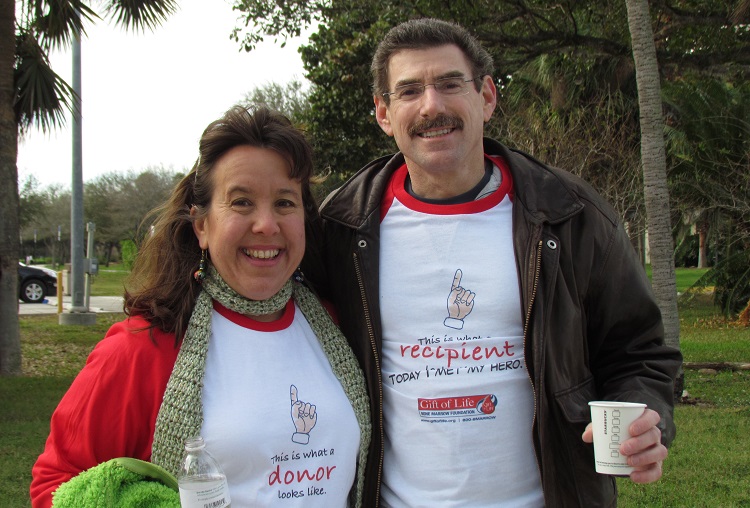 I was diagnosed with myeleofibrosis, a fatal bone marrow disease where the bone marrow becomes extensively scarred, in December 2007. I learned of my illness when I had an unexpected gallbladder surgery and had uncontrolled bleeding, which resulted in a bone marrow biopsy to determine why I had bled. Though the condition could be controlled by medication, the doctors informed me that I would need a bone marrow or blood stem cell transplant within two years to survive.

As the doctors predicted, almost two years after my diagnosis, my bone marrow failed. I received blood transfusions every two weeks, and we made arrangements to have my bone marrow transplant in Seattle. I knew from testing that there was only one perfect donor for me.

I arrived in Seattle in March 2010, weak, in constant pain, having lost 15 pounds, and dependent on blood transfusions—but hopeful. While my transplant work-up was being completed, I contracted a viral infection that went to my heart, leaving me very ill. Because of the infection, my transplant was cancelled. This was a real setback and a big disappointment. My wife and I were told we would have to wait at least a month for the infection to resolve, and hopefully, for my heart function to improve. Fortunately, by the end of the month, my heart function had returned to normal, and my transplant was rescheduled.

My transplant was scheduled for May 17 on my 24th wedding anniversary. My wife and I felt that this was a “sign” that all would go well. The blood stem cells from my donor arrived late at night on the 17th and had to be prepared for the transplant. The transplant was moved to the next day, the 18th, and our good luck “sign” vanished.

On May 18 at 2:40 p.m., the stem cells arrived at the hospital and were brought to my room. A small IV bag with less than seven ounces of stem cells from my donor was hung and dripped into my blood stream. In two hours, the transplant was completed painlessly, miraculously, and somewhat anticlimactically. I kept thinking how unfair it was that my donor could not be there to witness the event made possible by her unprecedented generosity. She had given her stem cells as a potentially lifesaving transplant to a complete stranger.

During the first month after the transplant, I was quite ill, weakened from the chemotherapy, and had lost quite a bit of weight. My recovery was initially slow; however, by the end of the first month, I began to feel better, despite the fact that my transplant was not functioning properly.

One year after my transplant, my physical exam and bone marrow biopsy demonstrated that I was completely recovered and in excellent health. My bones and bone marrow were now completely normal, and my fatal diagnosis of myelofibrosis was literally “history.”

In February 2012, one of the most memorable and emotional days of my life occurred. Thanks to the generosity of the Gift of Life, I met Jill, the woman who had saved my life. It was so wonderful to meet her, hug her, and “thank” her in person for what she had done for me and my family. My oldest son, Alex, was with me, and he, too, was emotionally touched to meet the woman that had saved my life. Her kindness and generosity will never go unappreciated. I have a friendship with Jill that I will always cherish.