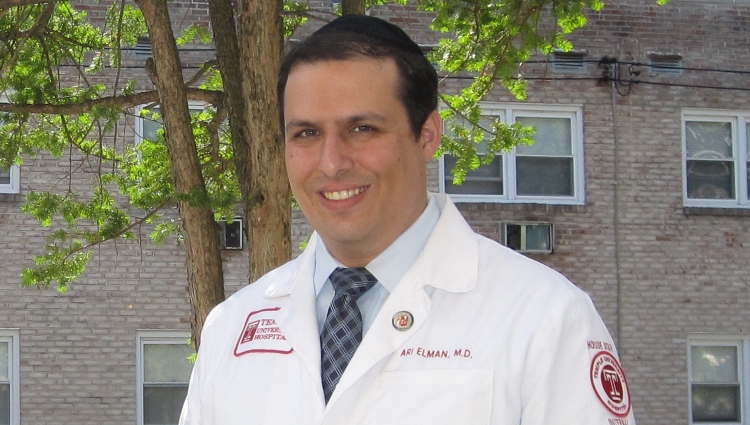 Life can change in the blink of an eye. For thirty-one-year-old Ari, a recent graduate of the internal medicine program at Temple University and father of four, it was becoming a blood stem cell donor that changed the course of his life.

Ari decided to swab his cheek at a donor drive that was held at Yeshiva University in August 2001. Seven years later, while pursuing his medical degree from the University of Maryland, Ari received the call that only few people receive. Ari was amazed, feeling both excitement and shock: “When I got the call, it was like winning the lottery. The odds are so small and to be given an opportunity to save someone’s life made me feel so fortunate.” Although he was busy with medical school, Ari was able to complete all of his confirmatory testing and donated on his medical school’s campus in August 2009.
Shortly after donating to a 66-year-old man with myelodysplastic syndrome, Ari decided to change his prospective specialization in medical school from ophthalmology to internal medicine. Ever since he knew he wanted to practice medicine, Ari was set on following in his father’s footsteps and becoming the next ophthalmologist in his family, but certain events pushed Ari in a different path.
Having been a counselor at Camp Simcha, an overnight day camp for children and teens battling cancer and other blood-related diseases, and after his heroic act of saving a stranger’s life, Ari decided to specialize in oncology and battle cancer. Currently, Ari is Chief Resident at Lankenau Medical Center. His career track coupled with his passion for helping those with life threatening diseases have been a determining factor in his decision to pursue a fellowship in hematology and oncology.
Becoming a bone marrow donor with Gift of Life allowed Ari to experience what it felt like to be a patient and not the doctor. His commitment to Gift of Life did not stop there. Ari is ready and willing to donate again. “Of course I would donate again! But seriously, what are the odds of hitting the lottery twice?” said Ari. He has been instrumental in fundraising for Gift of Life, through online channels that fellow donor Scott and he implemented together. The group's collective efforts raised more than $4,000 towards testing new bone marrow donors.
SHARE
TWEET
All Posts
Stories
News
Speed Swab Kit