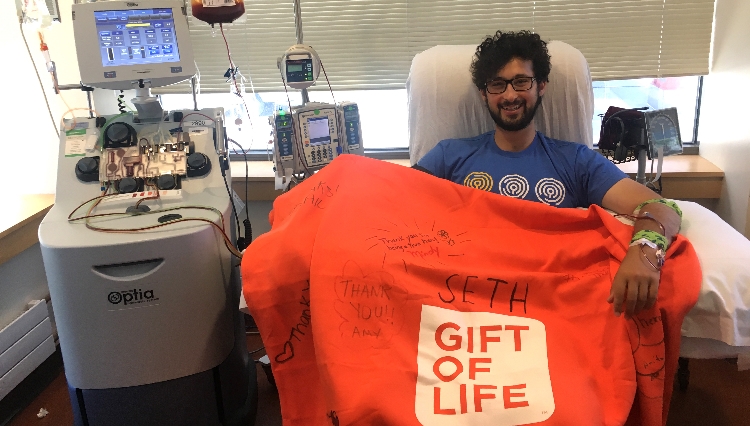 Gift of Life’s partnership with Birthright Israel, a program that offers free educational trips to Israel for young Jewish adults, began in 2004. Because the donors most frequently requested by transplant centers are between 18 and 25 years old, the alliance made perfect sense: Gift of Life speaks to the tour groups to reach potential donors in this ideal demographic, and in turn, Birthright’s young participants have a chance to pay it forward. By joining the registry and giving to others, they exemplify the Jewish values of pikuash nefesh (saving a life) and tikkun olam (repairing the world).

In mid-2017, a young man, Seth, became the 200th volunteer donor swabbed on Birthright to give bone marrow or blood stem cells to save the life of a cancer patient. Seth, who joined the registry in 2012, donated peripheral blood stem cells (PBSC) five years later (July 2017) to a man suffering from Acute Myelogenous Leukemia.

“Gift of Life spoke to our Birthright group, and I remember thinking that joining the registry would be a great thing to do,” said Seth. “They said it was fairly rare to actually be a perfect immune system match for someone else.”

Marrow matches are based on inherited immune system factors that have millions of possible combinations, so the more people who join the registry, the more likely that lifesaving donors can be found.

Seth stayed busy for the next five years, earning undergraduate degrees in Physics and Mathematics and in Economics from Tulane University and a PhD in Economics from Boston University. Then right after graduation, his parents started receiving persistent phone calls. “They hung up on Gift of Life about five times because they didn’t know I had joined the registry,” said Seth.

Seth received Neupogen™ to stimulate the production of the PBSC before donating. “I felt a little flu-ish from the shots, but everything went quickly,” said Seth. “My Gift of Life coordinator initially told me I might spend a total of 20 hours between the medical exam, shots and donation, but they were so organized it took much less time than that.”

“I would absolutely donate again, this experience is awesome. If you want to do something to help other people, do this.”

On his day of collection, Seth met his Gift of Life coordinator at the donation center, and he said his process went smoothly. Every donor receives one of the organization’s orange blankets during donation signed by the staff to thank the donor for their generosity. Seth put his on the couch and friends immediately began asking about it and expressing their support for his decision to save a stranger’s life.

A few months after donating, Seth learned that his recipient was doing well and he’s very interested in the possibility that they will be able to meet someday.

“I would absolutely donate again, this experience is awesome,” said Seth. “Being a donor offers a higher upside than other forms of volunteering – you can save someone’s life and then maybe meet them! If you want to do something to help other people at a low cost to yourself, do this.”

That sounds like an economist talking, and indeed, after donating, Seth joined the MIT Initiative on the Digital Economy as a Postdoctoral Associate, where he works in the economics of automation, digitization and networks.