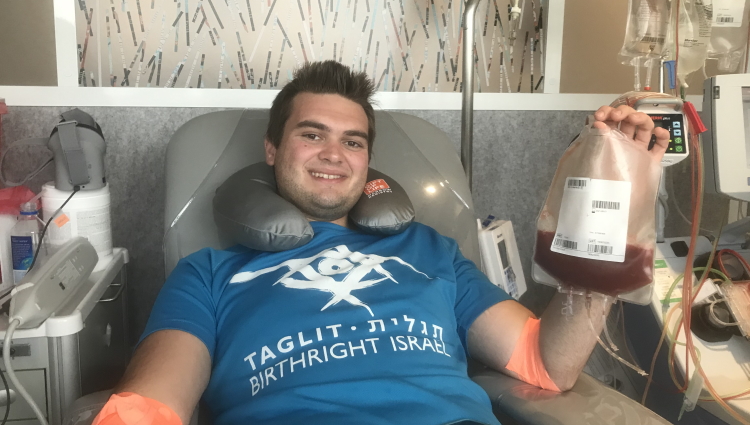 Ben is passionate, and he doesn’t do anything by halves. He has led five Birthright Israel trips to introduce young people to Israel, he joined Gift of Life Marrow Registry and saved a woman’s life, and even that wasn’t enough. He took his excitement about being a blood stem cell donor even further and swabbed 675 new potential donors in just three weeks last December! How did he do it all? Like many Gift of Life donors, his story began in Israel.

“I swabbed my cheek and joined Gift of Life while I was on my first Birthright Israel trip in 2017,” said Ben. “Everyone knows people who have had cancer, so it would have been a shame to forego the opportunity to help someone.” He went on to lead several trips as a tour guide and encouraged those in his groups to join Gift of Life, too, when the opportunity to swab came around.

Then, two years later, his phone rang and Gift of Life was on the line. “When I learned I was a potential match I felt like I’d won the lottery,” said Ben. “I know a perfect tissue type match between people is rare, so I was very hopeful that it would be close enough for me to donate.”

Ben was thrilled when he got the go-ahead to prepare for donating stem cells to his match, a 63-year-old woman battling acute myeloid leukemia (AML). “My mom is 62, nearly the same age as my recipient,” he said. “If it were my mom who was sick, I hope someone would step up to help her. I like to think that everyone would take the opportunity to save a life. To be put in that position is very inspiring.”

Ben’s determination and excitement opens doors for him, and his workplace was no exception. Once his employer, Finn Partners, learned he was preparing to donate stem cells in Boca Raton, they sent him to work from their Fort Lauderdale office temporarily. It was at that office where he was able to receive the Neupogen shots from a visiting nurse that would help move his stem cells from his bone marrow into his blood stream. The miracle of transplantation is that these cells can be collected from a donor’s blood and transfused to a patient, giving them a healthy, functioning immune system that will help fight off any remaining cancer cells.

“The whole experience of donating at the collection center floored me,” said Ben. The Dr. Miriam and Sheldon G. Adelson Gift of Life—Be The Match Collection Center had just started its first collections in the weeks before Ben donated, making him one of the first dozen donors to experience the fantastic amenities and spa-like atmosphere that Gift of Life CEO Jay Feinberg envisioned for the space.

“I was super comfortable, the concierge was great, it felt like going to a fabulous spa,” said Ben, whose mom came with him to the collection center to support him and see what the donation process was like.

There’s still another layer to Ben’s commitment to help blood cancer patients. “Coincidentally, my uncle, my mom’s brother, is in treatment for AML,” said Ben. “I mentioned this during my donation, and Jay stopped in to talk to me, and got the ball rolling on a search for a donor for him. My uncle has now received a transplant and is in the recovery period.”

After donating, Ben was inspired to do whatever he could to save more lives. He was in the process of planning to guide his fifth Birthright Israel trip, when he got a great idea. “As a trip leader I could only influence the 40 people in my group, but as a donor I wanted to share my story with many groups,” said Ben. [left] Ben speaking to a Birthright Israel tour group in December 2019. In 30 days he recruited 675 young donors to join Gift of Life's registry in the hopes that they, too, may be able to save the life of a blood cancer patient.

Gift of Life also thought this was a great idea, so when Ben went to Israel in December, 2019, it was to speak on the organization’s behalf to as many Birthright Israel groups as possible. His message was compelling, and 675 young people took his message to heart, swabbed their cheeks, and joined the registry – all in a space of only 30 days.

When he returned home to work, he volunteered for Gift of Life’s Young Professionals Committee in New York City, arranging for Finn Partners to sponsor the Celebrating Life New York event, where Ben was honored for his dynamic recruiting in Israel, and for being such a great spokesman for Gift of Life.

“When you’re on Birthright you visit Yad Vashem, the world’s Holocaust Museum,” said Ben. “Something that made a huge impression on me was the number of people who put their own lives and the lives of their families at risk to save other people. Donating stem cells or bone marrow is a way to do something, to save someone else’s life, without putting yourself or your family in danger.”

“Donating gave my life a much-needed shake-up,” he added. “I gained insight, I feel re-energized, and I have a focus for my time and energy. This changed my life.”

Ben works at Finn Partners, an advertising/PR agency headquartered in New York City, and in his spare time, volunteers for Gift of Life. Finn is planning to hold donor recruitment drives in the near post-coronavirus future.